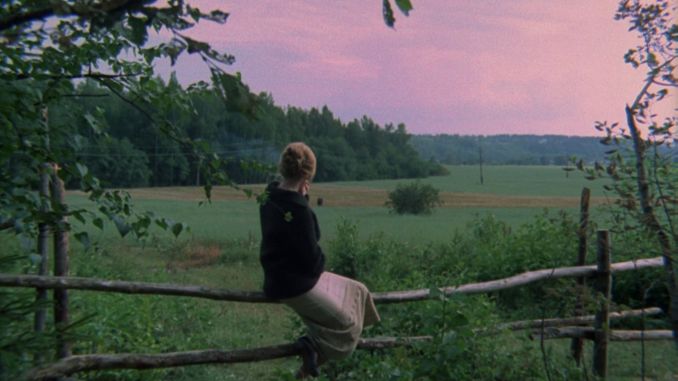 In Soviet Russia, a dying man lies in his hospital bed. He reflects on his life: rights, wrongs, sorrow and joy. He conjures up images of his mother but imagines her with the face of his ex-wife. He imagines himself young in the form of his teenage son. Plagued by the pain he has inflicted on others and knowing he cannot redeem himself, he resigns himself to the past and the life he has known and prepares to die.


Mirror, directed by Andrei Tarkovsky, has been dissected since 1975, and with each interpretation and re-examination we find new meaning. Although the film is at times inconsistent and convoluted, there is an underlying theme about generational trauma and the effect of outside events changing our lives.

The film’s main exterior event is World War II and the Sino-Soviet conflict, which forces the family to evacuate Moscow and live in the countryside to avoid war. We follow Alexei as he tries to make sense of the events unfolding around him. Alexei’s mother, Maria, also has to deal with the changing world while caring for her children and waiting for her husband, who has gone to war. Through a series of events beginning in 1935, we watch confusion and resentment build among war-torn characters.

We find ourselves in 2021 in a similar position. We are facing the end of a long period of war, and many of us cannot remember a time when our country did not occupy another. In 2001, the United States faced the worst attacks ever on American soil. The September 11 attacks would forever alter the lives of American citizens, especially the young people who would inherit the United States after its aftermath. The same way Maria tried to protect Alexei from the horrors of the world, American parents wanted to protect their children.

In Mirror, Maria is a reviser in a printing house in Moscow. Maria is a career woman who is quite brutal with her dedication to perfection, throwing herself into a panicked frenzy, worried she missed an edit. Maria’s rigid nature prompts her colleague to lecture her on behavior, reducing Maria to tears. We glimpse pre-war Russia as she works. The industry surrounding Maria and the modernization of the city provide insight into the growing new world of work. We see Maria as tough and capable, but as the battle rages on, she twists and turns into a shell of who she was, eventually straining her relationship with Alexei.

In 2001, the world we knew changed overnight. Parents became paranoid, stories of racist violence followed in the wake of the ‘war on terror’. Adults have become shadows of the people they used to be, hiding their children behind them while dealing with the brutality of events on screen and its manifestations in the behavior of other adults.

However MirrorThe nonlinear narrative of creates a frenetic, dreamlike hellscape where war disintegrates family ties, we manage to find an obstructed sense of familiarity in extreme dysfunction. During a flashback, we observe a teenaged Alexei practicing rifle with an austere instructor. Shy and slightly incapacitated, Alexei struggles to catch the move and eventually begins his failure as a soldier. This intimate look at how Alexei struggles with the masculinity of rifle training and harsh instructor teaching recalls the early days of the war in November 2001, when the United States sent 1,300 American troops in Afghanistan. Images of the young men were shown on the evening news. Reports soon accompanied the dinners of the arrival of soldiers and presidential assurances.

We watched parents speak, through clenched jaws, to their children at the dinner table about the growing death toll and what it meant to them to be safe in America. Children who were from Iraq, Afghanistan – any country in the Middle East – or who were just racially ambiguous were given instructions on how to behave so as not to be hurt by d other students. Even after two decades, racist attacks are still part of their lives.


MirrorThe use by images of war, intertwined with Alexei’s memories and dreams, is directly reminiscent of how 9/11 footage was broadcast for hours on major news stations. Delivered to children and young people, it was socially imperative that we watch as this is the story on live TV.

Children were left confused, scared and scarred by the images, and in recent years it’s almost become a talking point to remember seeing it for the first time. When discussing our age, who showed it to us, do we remember being scared. Trivializing our PTSD and our collective traumas, and years later, we’re still trying to make sense of what we’ve seen.

Alexei looks at his son, Ignat. He imagines that his son has his face, as if looking at himself. Alexei’s youthful uncertainty and shy nature mimic Ignat’s early teenage days. Alexei tries hard to give Ignat more independence as a growing boy, but Ignat seems content alongside his mother, just like Alexei was. Alexei’s self-imposed nature with his son makes expert remarks on generational trauma. Parents living through their children is not a new concept, but we literally see it through Tarkovsky’s film, as a father imagines he is his son. Many parents saw themselves as children during the invasion, filled with fear and anxiety, looking to the country’s leaders for answers. For the elderly, memories of the Vietnam War were a direct trigger that led to muffled whispers after dark: “Do you think they’re going to reinstate conscription?” »

The purpose of a mirror is reflection, allowing us to look at ourselves, and Tarkovsky’s film acts as an allegorical tale about the importance of meditation. The past cannot be changed and we watch Alexei’s grief at losing his life, which is perhaps the film’s deepest tragedy.

For Millennials and older Gen Z growing up in the 2000s, tragedy is all they have known, and Millennials are still grieving. From 9/11 to economic crises, housing crises, pandemic, famine, climate change and insurgency, the lives of young people have been defined by ever horrific world events that further decimate their desire to participate in the promised world of their youth. Tarkovsky also embarks on a journey of understanding. Alexei knows that at this point in his life, nothing will get better for him, but he can hope for a better world for his son. Even though Alexei tries to be a good father, Ignat’s trauma builds from his loneliness and witnessing his parents’ divorce. Ignat’s personality is developing, but we can already see that he is suffering emotionally.

America never fully recovered from the attacks and, in this way, its people never emotionally healed from the trauma. America skilfully avoids every incident and reclaims the grief with capitalism. Human Rights Watch explained that the pandemic has further exposed the United States’ financial inequality and its hypocritical treatment of “essential workers” by giving them a title and a temporary raise while enforcing working hours and conditions that put the workers in immediate danger.

The emotional pain is not over, the cyclical nature of grief in the age of the 24-hour news cycle is constant and acute, and it can be easy to imagine yourself as Alexi, lying in bed, reflecting on the days past. Remembering the good, the bad, and how our lives are often shaped by the exhaustion of experiencing major world events.

There is a legacy of American misery that depends on your social status. Generational traumas are passed down like family jewels. It seems almost impossible to refuse the sorrows of our elders and, before we know it, we are covered in weighted chains of silver and gold that grow heavier as we bear our burdens. Yet Tarkovsky’s illustration and understanding of how trauma is collected and distributed in Mirror is legendary in itself. Mirror came through a line of film scholars and Criterion film enthusiasts, finding himself discussed and admired in Tarkovsky’s film groups on Facebook. Mirror is so beloved that earlier this year it was restored by Mosfilm with a new release from Janus Films, ensuring that Tarkovsky can be seen in all his glory for years to come. The biographical nature of the film continues to relate to new viewers and veteran watchers – Tarkovsky offers us to temporarily wear his chains and return them, which makes Mirror a stark reminder that disaster devastates the world within and the world outside.


An aging goth and Detroit native, Buhalis covers music, film and culture, the darker the better! Recent Paste contributor Buhalis writes in a dark Victorian mansion and is known to only go out at night! You can follow Buhalis’ adventures on social media and Patreon.