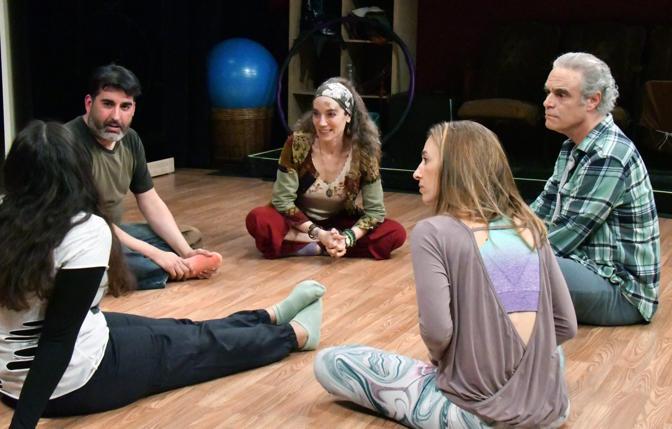 Transformation Mirror Circle, currently mounted by the Custom Made Theater Company, is the third major Bay Area presentation of Pulitzer Prize winner Annie Baker’s work in recent years, after John at ACT and The film at Shotgun Players. It’s just as oblique, smart, and edgy as those other love-or-hate shows (take that as a decoy or a warning). I’m an inamorato, which made the chilling intimacy of this one all the more engrossing.

An ingenious work of meta-theatrical metastasis, the play is set in a mirror-walled studio at a Vermont community center, where instructor Marty, played with saucer-eyed perfection and fed granola by Emily Keyishian, teaches a six-week intro – acting workshop to four novices, one of whom happens to be her husband (David Boyll, striking the right balance between flattery and fed up). Such classes being what they are—and arts-inclined Vermonters being what they are—the weekly sessions owe as much to therapy as to Thespis.

The marital tensions, identity crises and other personal anxieties of the members of the class are found in the improvisations, the incentives for creativity and the confidence exercises in which they participate. Where Method Acting is about complete emotional identification with a fictional character, the method presented here is about fully disclosing one’s neuroses. to his nosy fellow citizens.

Watching them participate in awkward acting games, which will be recognizable to audience members who have taken this type of course, we learn about the band members’ past breakups, see them stumble into flirtations and flings with each other. , and usually coalesce into a codependent pablum-soaked blob of goo.

One of the show’s most delightful moments comes in the middle of a recurring exercise in which the group lie on the floor and attempt to communicate telepathically while counting to ten, when Lauren (Brenda Cisneros, nailing the complete eye-roll of teenage attitude), a high school girl and the youngest member of the class by at least a decade, suddenly gets nervous, loses her temper, and asks “Are we gonna do some real acting ?”

For viewers of the game, this provocation opens the floodgates to all sorts of puzzling fun: we are invited to reflect on what it means to watch actors play non-actors who want to be actors; determine whether this type of lesson serves a legitimate purpose (and whether that purpose is related to theater skills or simply social skills); and guess what playwright Baker thinks of the people and situations presented in her own play.

It’s a special treat to experience this show in the cramped confines of the 49-seat Phoenix Theater just off Union Square (Custom Made was previously in residence at the Sutter Street Theater complex). The audience is seated on the perimeter of the classroom/studio in which scenic and lighting designers Starr Jiang and Weili Shi have hidden strange effects to punctuate the mental meltdowns and cognitive cramps experienced by Baker’s characters.

The proceedings are all well-orchestrated by director Ciera Eis, who helps us guess if we’ve just been shown how the sausage is made or if we’ve been given a bad parody of the process.

Help keep the Bay Area Reporter going during these trying times. To support local, independent and LGBTQ journalism, consider become a member of the BAR.