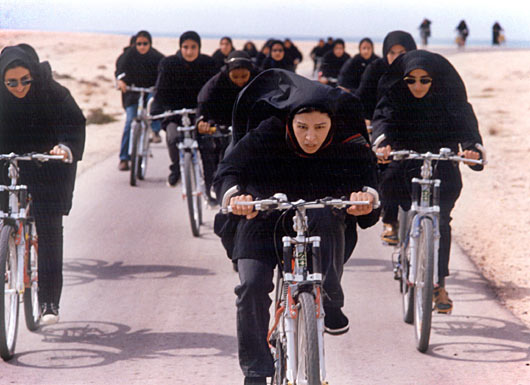 In their films, Iranian filmmakers penetrate the deepest recesses of the female heart and mind, beyond the darkness of purdah, exploring the synthesis of their inner courage and infinite resilience.

If cinema, like literature, reflects the cracked mirror of society, contemporary Iran lives a daily cinematic reality, 24/7, even if its best filmmakers are either in prison or in exile. If grieving is a painless experience, it is not in Iran these days, with the death toll of peaceful protesters, especially young women, rising every hour, and thousands sentenced to prison. .

Indeed, even when women (along with men) dance, sing, shout slogans, write graffiti and poetry on the walls, break down walls between male and female students in classrooms, make joy and holding hands, going around in circles, cutting their hair in public or waving their hijab as a symbol of defiance on railway crossings across the country, it is the funeral and collective mourning of the 40th day that has become a ritual marker of rebellion, like the cinema that unfolds before the eyes.

On September 13, Mahsa was walking with her brother in Tehran when she was stopped by the notorious morality police, who accused her of not wearing the hijab properly. Three days later, she died after falling into a coma. On October 26, the 40th day of Amini’s murder, which sparked prolonged and protracted protests for systemic change, police told his Kurdish family to refrain from crying or their son would be arrested. Therefore, her mother issued a public appeal asking everyone not to come to her grave on the 40th day of mourning.

On her grave, with barren hills in the distance, protesters wrote: “Mahsa is not dead, she lives.” Women had thrown off their hijabs shouting, “She lives, she is not dead,” on the day of her funeral, their collective cry and tears choking the arid landscape. On the 40th day, despite her mother’s plea and huge police barricades, thousands of people came to pay their respects and stand up for justice, defying the powerful state apparatus.

It has become a method in the magical re-enactment of this theatrical spectacle of mass mourning and defiance in Iran, whether it is the murder of teenage girl Nika, her head shattered, or the murder of Hadis Najafi, 20 years, by the cops. She had secured her golden ponytail with a rubber band, after throwing off the hijab, before joining the peaceful protests. Indeed, every moment is imbued with a certain strange and intoxicating experience, despite the relentless repression – the bravery and resilience of Iranian women becoming a glorious moment in daily history.

Courage and resilience, between reality of life unseen and expressed, between manifest and hidden suffocation, between thought and practice, the classic kaleidoscope of Iranian cinema, often with women as protagonists, behind and in front of the camera, seemed to have captured their intoxicating song of the road for a long time. Whether it is Abbas Kiarostami, Jafar Panahi (62 years old), Majid Majidi (63 years old), Asghar Farhadi (50 years old) or the House of Makhmalbafs, with its brilliant directors, among others, Iranian filmmakers have entered the depths of the heart feminine and spirit, inside and outside the walls of the house, beyond the darkness of purdah, and explored aspirations, the synthesis of despair and optimism, dreams and fantasy , their inner courage and their infinite resilience. Film after film, they have documented the cracked mirror that is the cinema of the incredible women of Iran.

The epic river of suppressed female angst and anger

In the highly acclaimed episodic film, “The Day I Became a Woman” (2004), directed by Marzieh Meshkini, with a remarkable screenplay by another great filmmaker, Mohsen Makhmalbaf (both in exile), there are three stories, and each anticipates the current crescendo of women’s repressed angst and anger that now flows like an epic river through the alleyways and alleyways of Iran.

“Ahoo”, the second episode, centers on Ahoo (Shabnam Toloui), a young woman in a burqa, who participates in a bicycle race, riding fast, as if possessed, as if she wanted to escape once and for all, in the landscape, with dozens of women on bicycles behind her. Her husband pursues her on horseback, a cheeky symbol of male machismo and power over his humble cycle. He is violently angry: ”If you don’t leave right away, I’ll take care of you right away…”

Other men, naked, pursue her on horseback, shouting: “Don’t drag us into this. Get down and take care of your life.” She doesn’t care. She rushes, pedals fast, her hijab flying in the wind, her beautiful face resplendent with the transparent colors of emancipation and defiance.

Samira Makhmalbaf (42) has made original films in difficult terrain, often taking big risks. His film, “At Five in the Afternoon” (2003), shot in a ravaged Afghanistan with chained women, is like a memory of things past and future in his own country, Iran. The film tells the story of a schoolgirl, Norgeh, who is sent to a religious school but sneaks into an all-girls school which allows her to doubt everything and discover the liberation of knowledge. Indeed, she hides a secret dream: she wants to become president of Afghanistan. Samira once said, “I want to reduce the pain of humanity through my films…There are things in this world that are very cruel.”

When the forbidden becomes paradise

Marjane Satrapi (53) was a little girl when the Shah was overthrown and religious fundamentalists took over. She was a defiant child, wearing jeans and t-shirts with rebel messages, and openly flouting the dress code ordered by the new regime led by Ayatollah Khomeini. So her parents took her to Vienna when she was 14.

Provocative as always, she refused to accept “deportation” to a foreign culture and returned to Iran. She was again expelled. It was then that her journey as a fabulous graphic designer, filmmaker, illustrator and author of children’s books began. She is now based in Paris. His graphic novel, ‘Persepolis’ (2008), depicting the political and cultural context under the reign of the Shah, with its Western freedoms, and the transition to stifling patriarchy and oppression under the new Islamic regime, became a classic of modern art. world literature. The films, adapted from his graphic novels, enjoyed great success around the world, but like most major Iranian films, they were banned in his own country.

In a December 2007 interview, Satrapi said, “It’s a matter of human nature. When they ban it, you want it. I thought discos were the worst places in the world, but when it’s forbidden, it becomes a paradise…”

The great actress Catherine Deneuve (79), favorite of Luis Bunuel’s surrealist films, gave the voice of a character in the film ‘Persepolis’. She said: ”It’s an unusual story. It’s so personal and so original and so strong – so simple and so strong at the same time. And I think anyone can understand the fear of being abandoned. (She was referring to how Satrapi was sent to school in Vienna.)

The dream of a peaceful revolution

Among other great Iranian filmmakers, Marva Nabili and Rakhshan Banietemad have made critically acclaimed films, exploring feminine expanse with its deep complexity with female protagonists. Iranian iconoclast Forough Farrokhzad’s life was cut short after his death in a car accident aged 32 in 1967, but his only short film, ‘The House Is Black’ (1962), which focuses on a leper colony, is considered to be a masterpiece of Iranian cinema; he subverts social mores and gives the subject a humanistic but not sentimental grace.

Jafar Panahi has done a great comedy parody which has won many awards around the world. His film, ‘Offside’ (2006) celebrates football in Iran and cryptically highlights how women are banned from watching matches in the stadium. A girl sneaks out, dressed as a boy, is discovered, punished and placed in some kind of detention center inside the stadium, with the soldiers themselves finding the whole affair utter nonsense, even as other female fans are arrested and detained. The film ends with Iran beating Bahrain by just one goal in a World Cup qualifier, and celebrations in the streets, with the cops and female prisoners also joining in the fun. which breaks out in Tehran.

Panahi, an outspoken voice for democracy and freedom of expression, is currently in prison, along with two other internationally renowned filmmakers: Mohammad Rasoulof (50), who directed “There Is No Evil” at two, who won the Berlin Golden Bear Award; and Mostafa Aleahmad, creator of ‘Poosteh (2009)’. They are among the dozens of artists, intellectuals and thinkers who are now rotting in prison. However, all seem unrepentant, stoic and unwavering in their defiance and pursuit of the dream of freedom and a democratic Iran.

On November 9, Taraneh Alidoosti (38), one of Iran’s hottest actresses, in an apparent act of defiance, posted an image of herself on Instagram, without the obligatory hijab, and with a placard bearing the original Kurdish version of ‘woman’, life, freedom’ (zhan, zhian, aazadi) slogan, in support of ongoing protests in Iran, which have seen dozens of people killed or arrested in the crackdown. Alidoosti has starred in films by award-winning directors, including Asghar Farhadi’s ‘The Salesman’, which won the Oscar for Best Foreign Language Film in 2017.

Iranian filmmakers behind bars are like the infinitely brave women of Iran on the screen of the glossy Iranian celluloid. Inside closed and invisible spaces. And now in the streets and crossroads, dancing and singing, fighting against all odds, celebrating the spectacle and the dream of a peaceful revolution against a short, brutal and wicked regime.