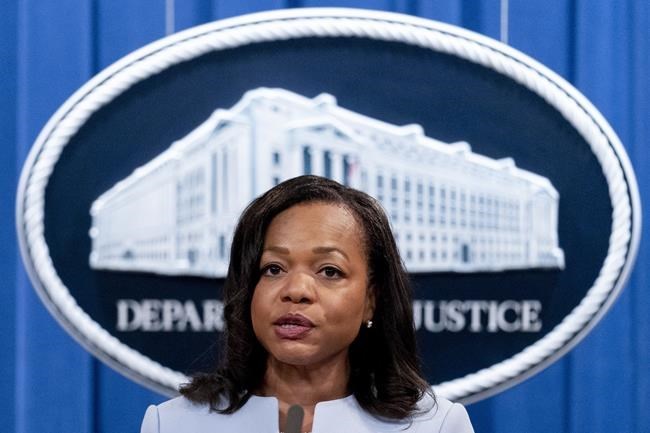 NEW YORK (AP) — The U.S. Justice Department has launched a full investigation into the New York City Police Department’s famed sex crimes investigators after years of complaints about how they treat victims of crime.

NEW YORK (AP) — The U.S. Justice Department has launched a full investigation into the New York City Police Department’s famed sex crimes investigators after years of complaints about how they treat victims of crime.

The police unit inspired the TV series “Law & Order: SVU,” and the real-life version has tackled such high-profile cases as the prosecution of former movie mogul Harvey Weinstein. But the division has also faced a decade of complaints about understaffing and cursory investigations.

In a 2019 lawsuit, a woman claimed detectives ignored her report that she was raped by someone she had been involved with, recording it as a “dispute” instead of a sex crime. Another woman said in the lawsuit that her story of kidnapping and gang rape had been grossly mishandled for months before she was told the case was “too complex” to investigate.

After the lawsuit and a leadership reshuffle, the NYPD promised change. But victim advocates say that didn’t happen.

“We hope that the Justice Department’s investigation and our trial will finally lead to real change for victims and survivors of sexual assault in New York City,” said women’s attorney Mariann Wang.

The NYPD said it welcomed the review and pledged to improve its investigations.

Police Commissioner Keechant Sewell said she believed any “constructive” review would “show that the NYPD has evolved and improved in this area, but we will be transparent and open to criticism as well as ideas.”

Mayor Eric Adams, a retired police captain who took office in January and named Sewell, said she immediately took steps to ensure the unit was “professional”.

“We weren’t sitting on our hands,” the Democrat said.

Breon Peace, the U.S. attorney in Brooklyn, said the NYPD has already taken steps to address the concerns, but authorities want to make sure victims are treated fairly in the future.

Justice Department officials said they are planning a comprehensive review of the Special Victims Division’s policies, procedures and training for sexual assault investigations – including how police interact with survivors and witnesses, collect evidence and conduct investigations.

Officials also want to see what steps the police department has taken to address the shortcomings, including the unit’s staffing and its services for victims of sexual assault.

The Weinstein case shone a light on the sex crimes division, which helped build a prosecution that ended in a landmark conviction for the #MeToo movement. But along the way, prosecutors dropped one of the charges in 2018, after evidence surfaced that a detective dragged away a witness and told an accuser to delete material from his cellphone.

A lawyer for the woman whose allegation was dropped from the case blamed prosecutors for what happened. She said on Thursday she welcomed the light on police practices, offering a mixed view of the police’s sex crimes unit.

“Our experience is that many viable sexual assault cases are dismissed by police in the early stages of investigation,” said attorney Carrie Goldberg. “On the other hand, some of the most significant sexual assault prosecutions in recent history – for example, that of Harvey Weinstein – were driven by the tenacity of dedicated NYPD investigators.”

After the 2019 trial, the unit got a new leader, Judith Harrison, and moved to what she called a “victim-centred” approach – but quickly changed stance.

Successor Michael King, appointed in 2020, was a seasoned investigator and forensic nurse. King was removed from office in February, amid complaints about his leadership and continued mismanagement of business.

Last October, a woman who identified herself as a rape victim told a city council hearing that detectives had not interviewed any witnesses or collected security camera footage from the bar where she stood. was before the attack, or tested for date rape drugs. She said they closed the case twice without telling her.

In another case, detailed in a 2020 New York Times article, a New York University student said a sex crimes detective openly doubted her allegation that a stranger raped her in her apartment. . The investigator dissuaded her from going ahead and closed the case, she said.

The alleged rapist, identified through fingerprints on a condom wrapper found in the apartment, was later jailed for burglary – but was eventually released and assaulted three other women because the Special Victims Division never told prosecutors he was a rape suspect, the Times reported. .

The unit has also come under scrutiny, including from the NYPD’s Internal Affairs Bureau, for allegedly mishandling rape kits and for investigators who allegedly abused the department on hours worked. .

Damian Williams, the US attorney in Manhattan, said victims of sex crimes “deserve the same rigorous and impartial investigations into their cases that the NYPD affords other categories of crimes.”