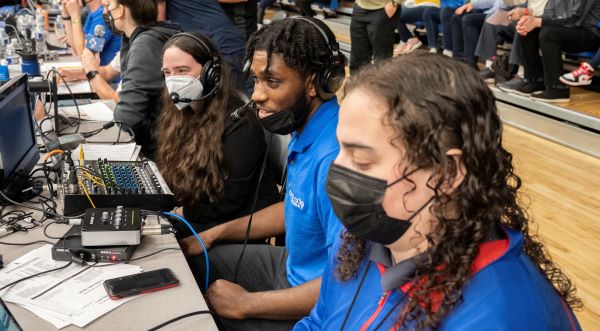 This semester, 29 students from Rowan’s popular Sports Communication and Media (Sports CAM) program have made the intern roster of the Blue Coats, the G League affiliate of the Philadelphia 76ers, and although they are not on the pitch (most of the time), they are as much a part of the matchday experience as the players themselves.

The two, after developing an idea for the large-scale lunchtime internship program on Rowan Boulevard, quickly sketched out a schedule in which up to a dozen or more rotating students work each home game.

By building experience and earning college credits, students, many of whom are aspiring sportscasters, run cameras, call games, offer analysis, keep statistics, work promotions, take tickets and interact with the team at all levels, from players to team president. Some even cover the games as the designated Blue Coats beat reporters for Pentecost.

All of this builds experience that can lead to a crucial first job.

“In this business, experience is everything,” said Hartman, a former Emmy Award-winning sportscaster.

For example, he says, when students who worked as reporters for Pentecost file a story, it works on multiple platforms – from the Strand site of the Blue Coats at the 76ers.

“There are a lot of eyeballs on these stories,” Hartman said.

During a Feb. 17 game against the Windy City Bulls, the G League affiliate of the Chicago Bulls, broadcast coverage was produced by Rowan students for ESPN+, a subscription video service.

“The game is broadcast live and a team of Rowan students are behind the scenes,” Hartman said. “They’re behind cameras, computer screens, on-court stats, a variety of roles.”

In fact, he said, every Blue Coats position held by a Rowan student mirrors one in the NBA.

“They’re exactly the same, but on a bigger scale in the NBA,” he said.

Launched in 2018, Rowan’s Sports CAM program is one of the fastest growing at the University. This semester, Hartman said, includes 296 students either as majors or pursuing minors.

Senior Lloyd Wilson, a Sport CAM major with a journalism minor from Rochester, NY, sees his Blue Coats internship as one more step toward his dream job – a broadcast position with the New York Knicks.

“I came to Rowan specifically for the broadcast opportunities and I was not disappointed,” said Wilson, who last season was one of two Rowan students to call the Blue Coats Championship game live. on Rowan Radio WGLS-FM.

“It’s all about experience, who really is the best teacher,” he said. “I found that to be something that I really like, but when you have a goal, and for me that’s broadcasting for the Knicks, you always have to say I can’t stop now.”

Kara Guno, a junior Sports CAM major with a journalism minor from Edison, said she’s dreamed since college of becoming a sportscaster.

“I now call G League games on the pitch and it’s the most wonderful experience,” she said.

Team president Meli noted that one of his key employees, former Rowan student Rebecca Sulzbach, handles all of the Blue Coats’ social media and is looking forward to hiring more. .

“These students are focused on partnering with a professional sports team and building a career. For me, having a direct pipeline of students that I know I can lean on is huge.

“The G League has always been about development,” he said. “To be honest, the student in me is a bit jealous. Doing everything they do before they even graduate… I don’t know of any other university that does that.

Hartman said an expanded internship program with the Wilmington Blue Rocks, a minor league affiliate of the Washington Nationals baseball team, will provide a similar number of opportunities for students this spring and summer.

Luke Lendler, a sophomore at Germantown Friends High School in Philadelphia, who attended the Feb. 17 game to learn about Rowan’s program opportunities, said he couldn’t be more impressed.

“I’m only 16, but sports broadcasting has been my dream since I was very young,” he said. “It’s the best way to get closer to the action.”