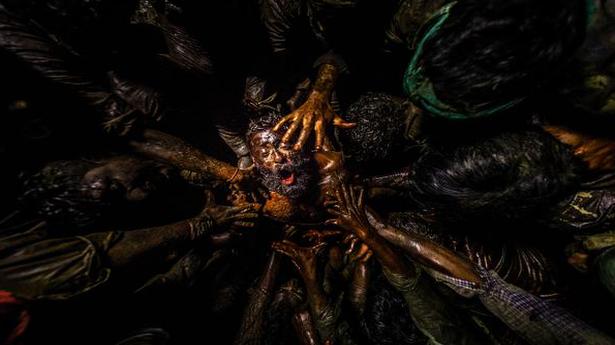 Directed by Vivian Radhakrishnan, the series has behind-the-scenes moments from ‘Jallikattu’, India’s official entry for the 2021 Oscars

Directed by Vivian Radhakrishnan, the series has behind-the-scenes moments from ‘Jallikattu’, India’s official entry for the 2021 Oscars

It’s been three years since Lijo Jose Pellissery dreamed up an exhilarating cinematic experience with
Jallikatu (2019)
. With a simple storyline – a buffalo escapes from a slaughterhouse and an entire village tries to hunt it – the maverick director explored the vagaries of the human mind in its raw form, blurring the differences between man and the beast. The film was India’s official entry for the 2021 Oscars.

Read also | Get ‘First Day First Show’, our weekly movie world newsletter, delivered to your inbox . You can register for free here

Bringing home all the action behind the making of this globally acclaimed film is an eight-part documentary series,
Molten Mirror , directed by Vivian Radhakrishnan. A 14-minute “introductory episode” was posted on YouTube to provide an overview of the series.

Vivian says, “The series is not about the film or the genius of Lijo Jose Pellissery. We show how an art [form] takes shape, covering different aspects such as cinematography, art, sound, artists, young artists, terrain, location, people… The effort put in by every department has been phenomenal,” says Vivian.

It was Lijo himself who brought him on board
Jallikatu . Fashion designer/photographer and filmmaker, Vivian says the offer came at a crucial phase in her life. He had made two films, both with new faces, but could not release them. “I was so disappointed that I decided to leave the plot. But then I showed the trailer for the second movie to Lijo
chettan and it ultimately changed my destiny,” says Vivian.

Vivian says he had no intention of becoming a filmmaker until a few years ago. “I worked with a company in Bengaluru for a while before launching a unisex clothing brand, Dirty Heads, in 2013. I chose photography to promote the brand.
Second show [directed by Srinath Rajendran] and was inspired by its manufacture. I decided to try my hand at cinema. A friend who watched my first movie (
Onnaam Bhaagam 2017) advised me to see films by Anurag Kashyap and this eventually led me to the works of Rajeev Ravi and Lijo
chettan ,” he adds.

It was not planned to make a series when he joined the set of
Jallikatu . “Lijo
chettan The goal of was to document the making in a way that it would be useful to budding filmmakers and technicians. But once the work began, we knew that a documentary might not do justice to such a seminal work. We had around 40,000 video clips to start with! said the 34-year-old man from Shoranur. While the film had 42 days of shooting, Vivian worked on it for nearly 60 days.

Shot in and around Kattappana in Idukki, the film brought in locals as junior artists. There were around 2,000, mostly in the scenes towards the climax. “Coordinating the footage with the crowd wasn’t easy and we captured those moments, raw and real,” he adds.

The intro episode has some of these artists talking about shooting in the freezing cold, that too in the wee hours. Their endurance was tested, especially towards the breathtaking climax where they form a human pyramid, soaked in mud from head to toe. Many ended up with bruises, some got sick…. Combat sequences and the making of animatronic buffaloes were also covered in the episodes. “Lijo
chettan gave me the freedom to capture his mood swings too! adds Vivian.

The series has been in the works for almost three years. Instead of taking bytes from the director, cast, and crew, Vivian, who is also the show’s cinematographer, used excerpts from their interviews with various outlets. Kiran Nath Kailas is the editor and Arun Nath Kailas wrote the narrative script. Sound design is by Jeswin Mathew and Ashiq KM is the associate director

Vivian says the show changed her outlook on life and acting. Now he plans to do more documentaries and has already focused on a few subjects from life. “I’ve never looked at human behavior and people in general so closely. I’m thrilled that we’ve made heroes out of everyday people.

He is delighted that the episode is appreciated by all sides. “[Director] Karthik Subbaraj indicated that after watching the episode, he was watching the movie again. We want to pitch it on OTT platforms. Lijo
chettan always says, if you do something, it should be new, otherwise don’t. I’m sticking with that,” he said.

2021-09-22
Previous Post: Review: Documentary “A mirror for the sun” | Bob Abelman
Next Post: Sekhar Kammula shows off a mirror, but not without his trademark style-Entertainment News, Firstpost